From the Cellar: Unibroue Terrible 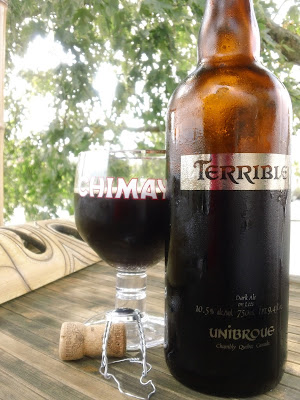 It's been a while since we pulled one out of the cellar for this blog, but with the weather getting colder there is no better time to dive into the big monsters that tend to lurk in my stash o' beer than now.

A bottle of Unibroue Terrible has calling me for a few years now, so let's check it out.

Unibroue are out of Canada, and until the American craft beer explosion they were easily one of the best brewers in North America. Hell, they probably still are. Specializing in Belgian-styles, they are matched only by brethren like Allagash and Ommegang. Hard to go wrong with anything they make.

This three-year-old bottle of Terrible pours the color of mahogany, with a thin, fizzy head that disappears almost immediately. Smells of black bread, dark sugars, and a hint of plum and grape rise from the glass. There is a candy sweetness to the aroma. Medium body, dark sugars, and very little alcohol despite coming in at 10.5%.

Age has treated it well. There is a softness here not common to ales. Whether through aging or because it was fermented on lees I don’t know, but it makes this beer drink wonderfully. (Lees is the leftover sediment from wine making, mostly dead yeast. In beer making, this is known as the trub.)

I paired this with spicy Asian cuisine and it was fantastic. I suspect it will go well with any bold meal.

Terrible has a lot in common with Trappist ales, especially after spending some time in the cellar. It drinks wonderfully smooth. TOO smooth, maybe, because it's hard to tell that it's a whopping 10.5% ABV. Since this comes in 750ml bottles, that means you should either take a few hours to sip it down or split it with a friend, otherwise you’ll be in trouble.

Unibroue Terrible is a fantastic beer when fresh, and after about three years in the cupboard it remains a fantastic beer. A little less "hot," a little creamier, but still delicious from start to finish. Thumbs up to laying a bottle of this down.
Posted by Eric San Juan at 12:29 PM

Eric San Juan
Eric is a freelance writer and editor who also dabbles in social media marketing. He is the author or coauthor of eight books, including "A Year of Hitchcock" (Scarecrow Press 2009), "Stuff Every Husband Should Know" (Quirk Books 2011), and "Breaking Down Breaking Bad (2013). You should totally hire him to write some stuff for you.